Home  /  What Gets Stuck Where?  /  A Problem with Xrays  /  3 Phases of Bronchial Foreign Body Obstruction 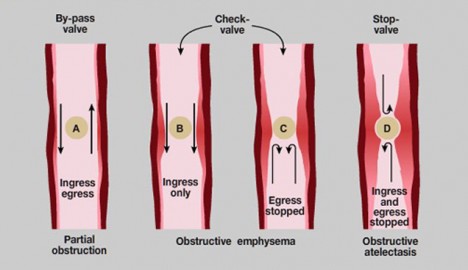 Over 100 years ago, Dr. Chevalier Jackson explained the stages of a foreign body:

At first, during the initial coughing fit, there is usually a by-pass valve (air moves freely around the foreign body).

After a small amount of swelling occurs, there is a check-valve. Air can enter during inspiration, but can no longer freely exit around the foreign body during expiration (when our bronchi collapse a little). This causes trapping of air, often within an entire lung. Each time the patient breaths out, the affected lung remains hyperinflated (obstructive emphysema). As seen on Xrays, this causes shifting of the heart to the opposite side, with each expiration. Also, with each breath out, only a tiny amount of air can escape past the foreign object. This causes turbulent air flow and a rippling effect on the soft tissues; thus producing those high-pitched sounds which are known as expiratory wheezes.

After more swelling, there is a stop-valve. This causes lung collapse (atelectasis), then pneumonia.

As Dr. Chevalier Jackson stated, “Not all that wheezes is asthma!”

How Can a Radiolucent Foreign Body Be Imaged?

For every choking-related death, an estimated 110 children are treated in hospital emergency departments for non-fatal choking.[Ref:43]