An inhaled object may become stuck above, between or below the vocal cords.

This causes a violent coughing fit, that lasts at least one minute.

Most commonly, the object flies all the way down the windpipe (trachea), into the bronchi. 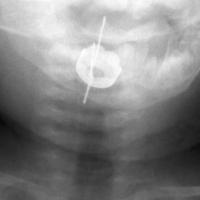 Foreign bodies stuck just above the vocal cords are very rare. Examples include the hardware from a Christmas tree ornament or a fish hook. Patients typically have noise when breathing inward, a muffled voice and pain when swallowing. 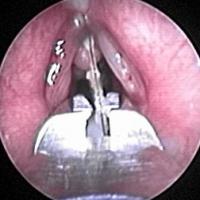 Thin, sharp objects, such as plastic stickers, pencil shavings or eggshells may become stuck between the vocal cords and create inflammatory tissue. Patients typically have severe hoarseness, noise when breathing both in and out and a “barking” cough. Sometimes misdiagnosed as croup. 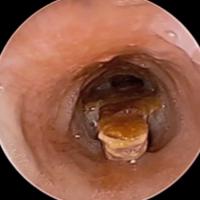 Foreign bodies very rarely lodge in the trachea. Examples include pieces of bacon or wood or even a marble. Patients typically have low-pitched noises; usually more when breathing out than when breathing in. A marble or other large object in the trachea would cause major respiratory distress. 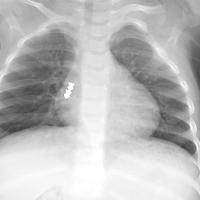 Most airway foreign bodies lodge in the bronchi (usually on the right). Examples include nuts, crispy fruit or vegetables, plastic toy parts, pins and thumbtacks. After initial an coughing fit, the patient feels better, but then develops a high-pitched “wheeze”, and about a week later, pneumonia. Not to be confused with asthma!